The ultimate Exocet suspension is now available from Exomotive and Öhlins USA.

The focus was clear from the beginning – superior road handling and track performance without sacrificing comfort on the street. The time of compromises is over. Starting with the existing Mazda Miata-based Öhlins DFV Road & Track suspension components, the Vehicle Dynamics Team at Öhlins USA spent three weeks with an Exocet on their 7-post MTS Vehicle Dynamic Simulator perfecting valving options and spring rates for the Exocet platform. The result is the best performing suspension package we have ever offered, fully tuned for the Exomotive Exocet. The Öhlins DFV Exocet suspension supports two well-tested spring rate options depending on driver preference for Road & Track or Dedicated Track rates. The system is also available with both spring packages to allow drivers to swap back and forth if desired.

A more than 30 year long tradition of high-end racing commitments and state-of-the-art solutions within advanced suspension technology is now available for the Exomotive Exocet from the Vehicle Dynamics Team at Öhlins. With Öhlins Exocet coilovers you will experience a car with blistering response times, improved bump absorption and a massive amount of grip to increase the safety when driving your car on the limit. The car will be easier to balance on the edge of what the tires can handle before losing grip, resulting in faster lap times. The DFV suspension prevents you from losing the racing line when hitting bumps or curbs, reacting quickly and keeping you in control of the car and in contact with the track.

The Features of DFV Technology
DFV is Dual Flow Valve technology – and only Öhlins offers DFV technology on its road and track products. The dual flow valve in the Exocet DFV suspension gives the same characteristics on rebound as it does on compression, thanks the damper fluid having a consistent path of flow in both directions. This means that the wheel and tire can quickly and effectively resume their connection with the ground, providing grip and traction. 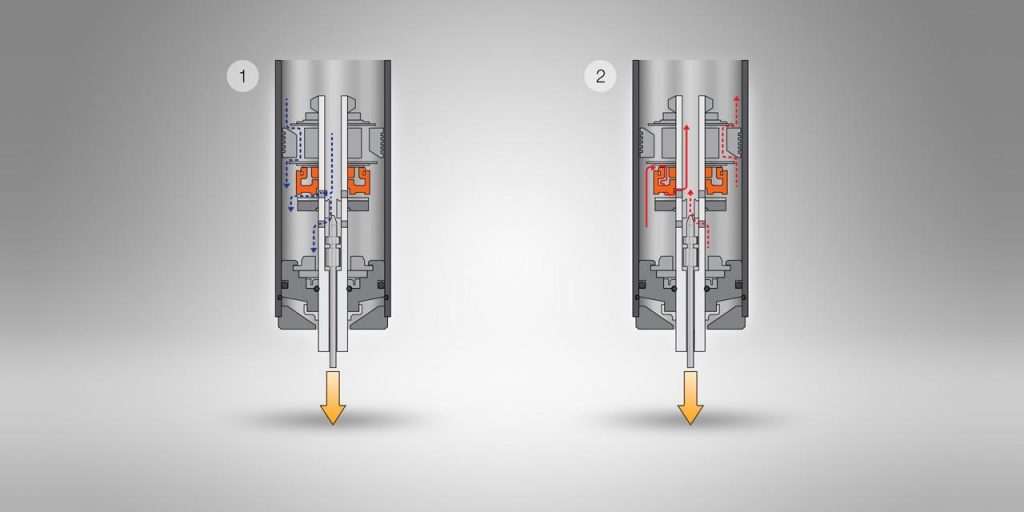 Because DFV opens quickly and easily on minor road imperfections, ride comfort is surprisingly supple and more akin to an OEM level vs a typical aftermarket coilover setup. Over undulating surfaces, the compliancy of the Exocet DFV units allows the car to crest bumps and potholes, while remaining stable and in control. Traction is always maintained at its optimum level. 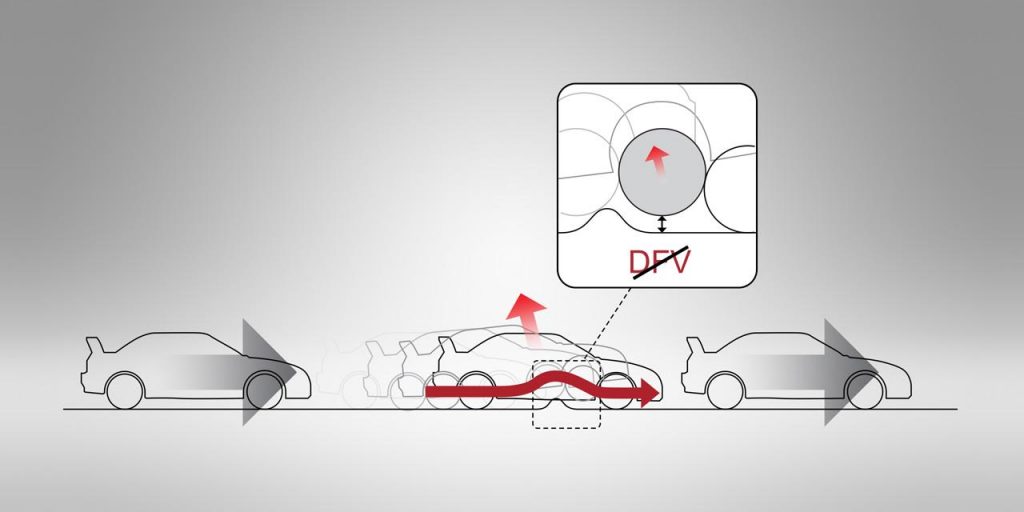 Figure 3: (Vehicle – no DFV) Without DFV the oil can not flow through the piston quickly enough on the rebound stroke after hitting a bump, so the tyre is not able to stay in contact with the road. 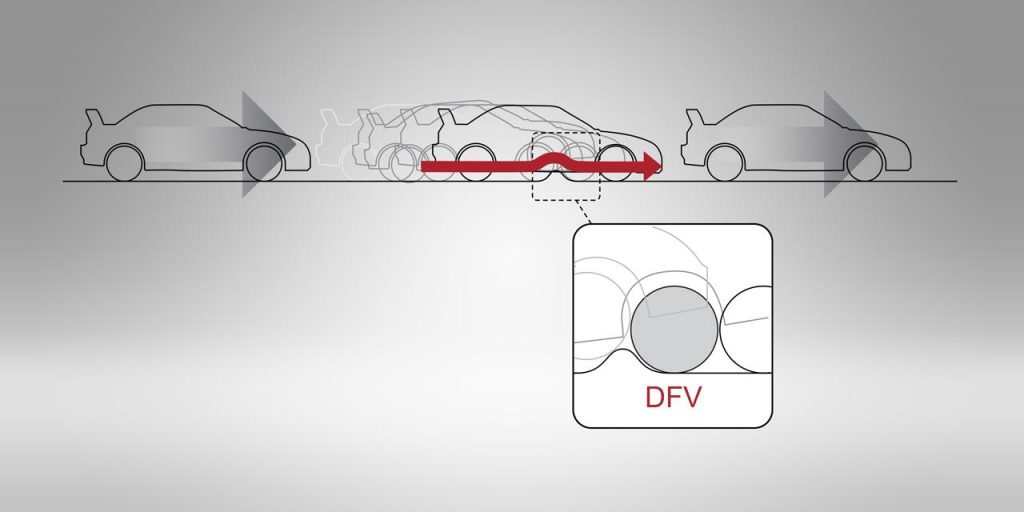 Figure 4: (Vehicle – DFV technique) The DFV valve opens, letting the oil flow quicker through the piston on the rebound stroke after hitting a bump, enabling the tyre to stay in contact with the road.

As the piston moves within the damper, it generates friction and therefore, heat. As the heat increases, the viscosity of the damper fluid can change, altering the car’s handling characteristics. The unique needle bleed valve on the Exocet DFV dampers expands with temperature, closing the gap that the fluid travels through, maintaining a consistent damping rate. The best thing of all? You won’t even notice! All you’ll feel is that the car responds consistently, lap after lap, turn after turn. Allowing you to concentrate on braking points and apexes while Öhlins takes care of the damping. 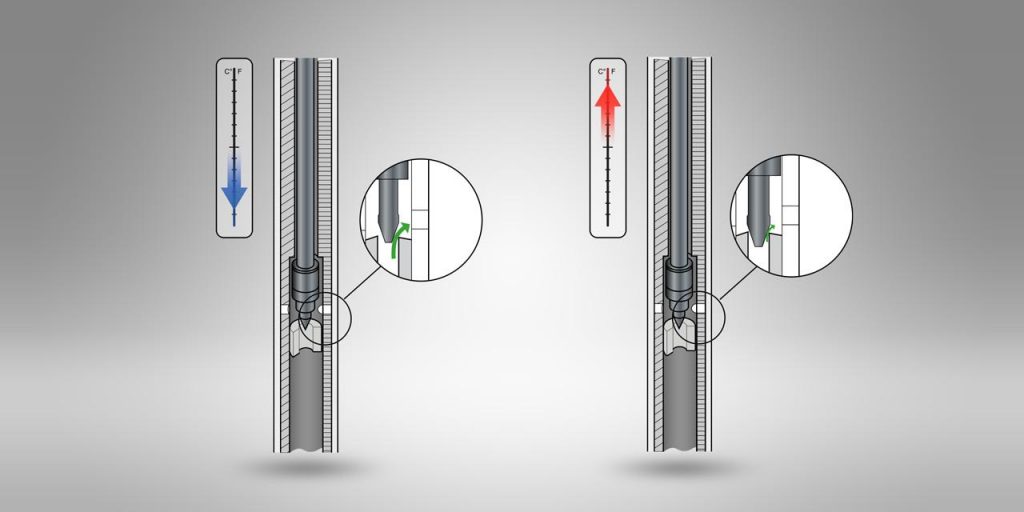 After heavy testing on the Vehicle Dynamics Simulator and hundreds of street and track miles, we have designed the Exocet DFV suspension to work well out of the box, but there’s still plenty of adjustment for you to set things the way you like. You like stiff and reactive? Or soft and forgiving? It’s all there. Too much low speed rebound damping can have an adverse effect on grip, so the easily accessible adjusters on the Öhlins DFV units allows small, but positive increments of fine tuning, so you can take into account every single parameter. Just a few clicks either way from our recommended settings will soon have your car responding precisely to your inputs and driving style.

Available exclusively through Exomotive. Custom built to order. Lead times are typically 2-3 weeks but can be longer at certain times of the year depending on demand. On sale now!

There are no reviews yet.